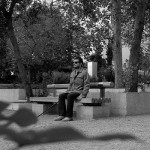 When did you start your career?
My first work is called “G.P.S.” and was produced in 2001.

Can you describe us the reasoning behind  “Beta Test”?

Beta Test is a love story in an empty Berlin. It is about two persons who accidentally(?) meet and somehow test themselves against each other or against some predesigned norm and/or command they seem to have.

The story works in two levels.

It is in principle based on the history of Berlin and refers primarily to the city itself, its own reunification and its future expected role as the new german capital. Possibilities and problems might and do rise at a level that reminds us today’s European Union when often things do not go the way they should. At the same time, in the film, Berlin becomes an example, a city-symbol, a theatre stage, a microcosm of perhaps the whole world and the occasional grand future visions that occure.

The whole atmosphere and of course the role and the way I choose to use and to visualise the city and its architecture basically seeks to create another, non-city, a total non-place which, by being beyond any specific period or nation characteristics, becomes a surface for displaying a contemplation around whatever central, ambitious, superhuman planning in a global society.

In that sense, the degree to which certain alleged “details” can effectively and efficiently escape from the norm, from this generalisation I mentioned above, is Beta Test.  Beta Test is an error that is sometimes fatal and sometimes rejuvenating. It is the element that reminds us that (un-)fortunately we can’t control ourselves and our future. This is perhaps the Achilles’ heel of a sterilised, indifferent, inappropriate, levelling, control society of surveillance, which I create. Beta Test is something that eventually does not go the way it was supposed to go. Even for a little while. It is a spontaneous love story or just the story or our entire world. For good or for bad it never goes really the way it was “planned”.

How long did the development of your film take?
It was about a month of writing, then a month of preproduction, 4 days of shooting and then a month of editing and another month for the sound score (which is originally written for the film) and the mastering.

Can you describe what was most challenging about shooting your film?
Of course the first challenge if you do independent films like Beta Test is how to finance them. Everybody who does or has done at least once, a film out of the ordinary production process and without any sponsoring and/or official budget, knows that, everything could be challenging when you are an independent artist, so even the smallest problem could be a big issue, while you have to find quick, practical and cheap solutions all the time.

A practical challenge we had, was to find all the locations empty of other people. For obvious financial reasons, i didn’t have the privilege to be able to close down streets or entire buldings in order to use them for shooting a scene. So I had to check a lot of locations again and again before actually shooting, In order to observe them and  find out if and when the perfect time is to go and shoot regarding to the atmosphere and the emptiness that I wanted to have.  In that sense, the film has a documentaristic aspect. I only used the original emptiness of the spaces instead of trying to create a pseudo-atmosphere, which has nothing to do with its original, by ways of emptying spaces by force. I should add to this that we didn’t use any additional-artificial light or any kind of scenography. What you see is exactly how all these places were and looked like at the time of shooting. So, to answer your question, a major practical challenge in Beta Test, was to find the empty locations by a very careful choice and combination of shooting places and shooting times.

How do you see the role of an independent artist nowadays?
An independent artist nowadays has to battle against the difficulty to exist really independently in the art making process by staying out of the ordinary mainstream channels of art production while at the same time avoiding the danger to get lost or whipped out. The question is how I keep producing new work without any compromise or how I stay independent without having to wait for my projects to be approved by some commissions, judges, producers, funds etc. before going to production. My role as an independent artist is among other things to keep proving through my practice that there are also other channels and other ways to exist, that there are always new alternative ways to create art, that do not necessarily go through the mainstream channels of creation, production and distribution.

What’s next? Are there any other projects that you are currently working at?
I am promoting and screening in different festivals and group exhibitions my last short film-project that I made last summer in Tbilisi/ Georgia which by the way is going to be presented as a French premiere at ECU, the European Independent Film Festival on competition at the Exprerimental Film Section and I am writing a script for a feature film planned to be made in Athens/Greece next year.

Screening films online – what are your thoughts about that? What do you think is the future of web and films?
The question is not if you screen films “online”, but where you see them while you screen them online. Is it on your smart phone or in a big multiplex? Obviously, depending on that, screening films online can be a completely different experience. It is important to understand the differences and appreciate the different qualities that a viewer can have from one online viewing experience to the other. In general I am not against anything, as long as the viewer understands and appreciates the differences between watching a film in the cinema, on TV or computer screen and/or on a tiny smartphone.

I think, in the future every film will be online on Ultra HD and we will be able to watch almost anything, at any time, at every possible screen and most probably at any possible prize.

And finally, what do you think about EuroIFC?
It is an initiative that hopefully shows the future of –at least a part- of independent filmmaking. The fact that everybody can log in to a website and see films for free without any ads or corporate sponsoring is a very democratic way of distribution. I don’t exclude the idea of profit-making from the film distribution channels of the future, I just wish that new ways of compensation for the distributors can be invented, so they can be able to offer more and more moving image art for free to an interested public. In that sense EuroIFC is in a direction that I respect and appreciate.